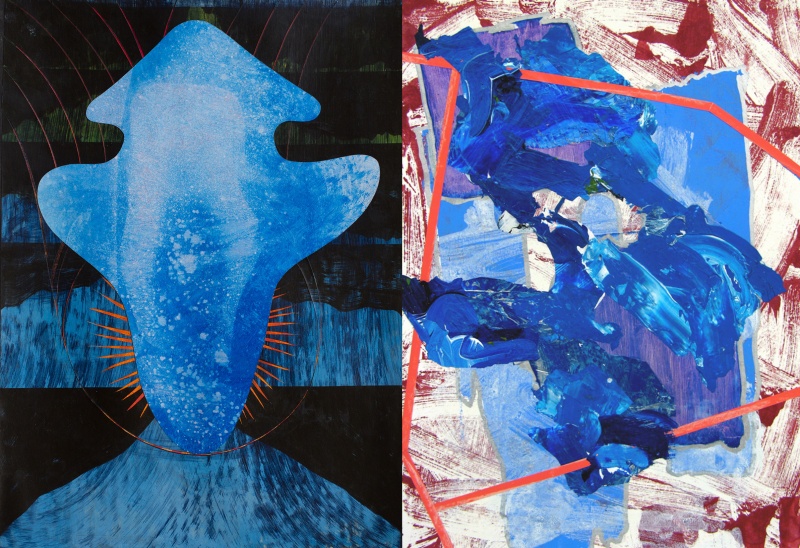 Forms of Resistance,  a two-person exhibition featuring works on paper by Tim McFarlane and Washington, D.C.-based artist, Miguel Rodriguez. The show consists of 20 new works on paper by each artist, with all work produced in 2017.

Exhibition Statement: When talking about the “why” behind this show, we made a list of some of the things which drew our interest. We spoke about survival, how it relates to cities, oppression, graffiti being put up, then erased, then put up again. Graffiti as protest art. How the traces of words and marks build up and form a sort of collective language over time. We touched on how that relates to evolutionary biology. How all organisms belong to the same tree of life and contain elements of each other, morphed into endless variety through long periods of adaptation and reproduction over time. How we are derived from microscopic meteor particles, our alien origins. How we dream of life beyond our planet, or wish that we would be rescued. Or how terms like “illegal” aliens take a whole group of people and make them the other. We found ourselves deep into the role of artists in societies, whose free speech and thinking goes against the grain of authoritarian ideologies, and how every mark we make, every painting we realize is a form of resistance.

Tim McFarlane is a painter based in Philadelphia, PA. McFarlane’s paintings and works on paper examine the fluid nature of memory, time and place, with an emphasis on color, multi-layered systems and process. A 1994 Temple University/Tyler School of Art graduate, McFarlane exhibited in various group exhibitions around the Philadelphia region before gaining representation with the Bridgette Mayer Gallery in 2002, where he has had several solo exhibitions.

Tim McFarlane has exhibited his work extensively in the U.S. in group exhibitions and featured at art fairs in New York, Miami, Dallas and San Francisco. He has been a visiting artist at several universities, participated in artist panels and has been a juror for exhibitions and grants. McFarlane’s paintings and works on paper reside in numerous private and public collections, including those of West Virginia University, Bucknell University, Temple University, the Hyatt Hotel at the Bellevue and more.

Miguel Rodriguez is a Washington D.C. based painter. He is a graduate of Tufts University/School of the Museum of Fine Arts, Boston, and has shown his work in Philadelphia, Trenton and Boston. He is part of the Earth Issue Artist's Collective, and was interviewed recently for Young Space, an online platform dedicated to emerging artists. His work is included in numerous private collections.